To import data from a QuickBooks Desktop file (.qbw), you will need to download and install the Fathom Desktop Connector. After installation, you will be able to upload data from your QuickBooks files into Fathom.

The Fathom Desktop Connector will work with any recent version of QuickBooks Desktop from the US, United Kingdom and Canada. We support versions from the current year and the three years prior. This includes Pro, Premier (all editions), Simple Start, and Enterprise Solutions. In cases where we do not integrate directly, we suggest using Excel to import your data.

To install the Connector and import financial data from QuickBooks Desktop:

After launching the Desktop Connector, follow these steps to import your company data into Fathom:

Fathom will then securely extract the data from your QuickBooks Desktop file, along with your selected classes, if applicable. Depending on the file size and internet connection speeds, this may take several minutes.

Continue setting up your company in Fathom

What if I am the accountant and not the administrator on the company file?

The administrator is the only user who can make the initial connection, but they can set the connection up so that other users are allowed to perform subsequent connections.

For this approach to work, the owner of the file will need to be comfortable creating a new user and performing an initial connection to the Fathom Desktop Connector in their environment. Alternatively you could ask them to briefly change the Administrator password and send you the file so that you can facilitate this process for them. 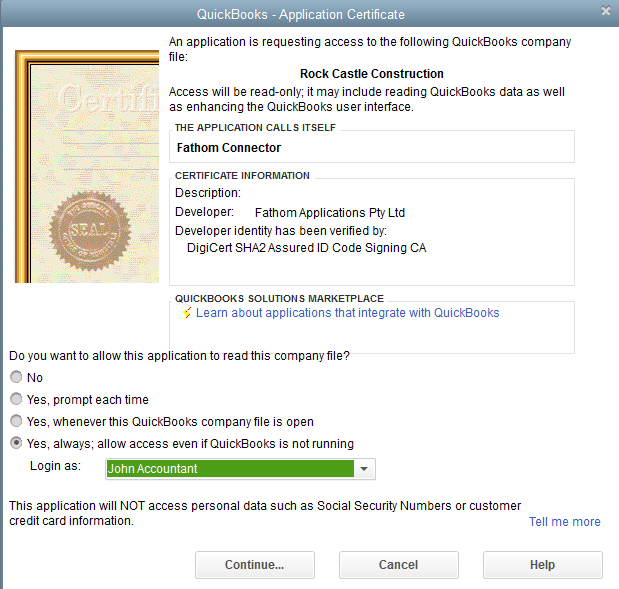 Congratulations on connecting your QuickBooks Desktop company to Fathom! Continue in the 'Getting Started Workflow' to finish setting up your company for analysis, reporting, and forecasting. Choose from the next workflow steps below:

💡Pro Tip: If you want to consolidate several companies in Fathom, we recommend importing and completing the setup process for each company before creating a consolidated group.