Combine all of your entities from different currencies into a single base currency for a consolidated group.

Written by Shale Heidinger
Updated over a week ago

In addition to standard consolidated reporting, Fathom enables consolidated group analysis, forecasting, and reporting for entities with different currencies. Please view this article for a full list of supported currencies. These features enable you to create an aggregated view of both the financial and non-financial performance of a group of companies.

For multi-currency consolidations in Fathom, you’re able to:

Fathom will consolidate financial results by unifying accounts that have:

Accounts from different companies that have these two elements in common will appear as a single account in the consolidated group and any associated amounts will be summed accordingly. Fathom does not consolidate accounts based on Account Code.

Accounts with different names or classifications, can be grouped in the Chart of Accounts with the use of headings. For a guide to creating headings see our Headings and Subheadings article.

You can also add your own custom exchange rates. For more information on this, view our dedicated article on 'Using Exchange Rates in Fathom'.

Finish setting up your consolidated group

To update the financial data of the group, you’ll simply need to select the green ‘Update’ button in the upper right corner of the consolidated group’s landing page.

The consolidated group will update all of the financials based on the underlying companies. This means that, if changes are made to an underlying company in its source accounting system or Excel and you want those changes reflected in the group, you’ll need to:

Adding companies to or removing them from the group

You can add companies to or remove them from a group on the consolidated’s group’s landing page. To add a company, select the green ‘+ Add company’ option. To remove a company, hover over the company and select the ‘three dot’ icon that appears on the right side of the screen. From the drop down menu, select ‘Remove’. 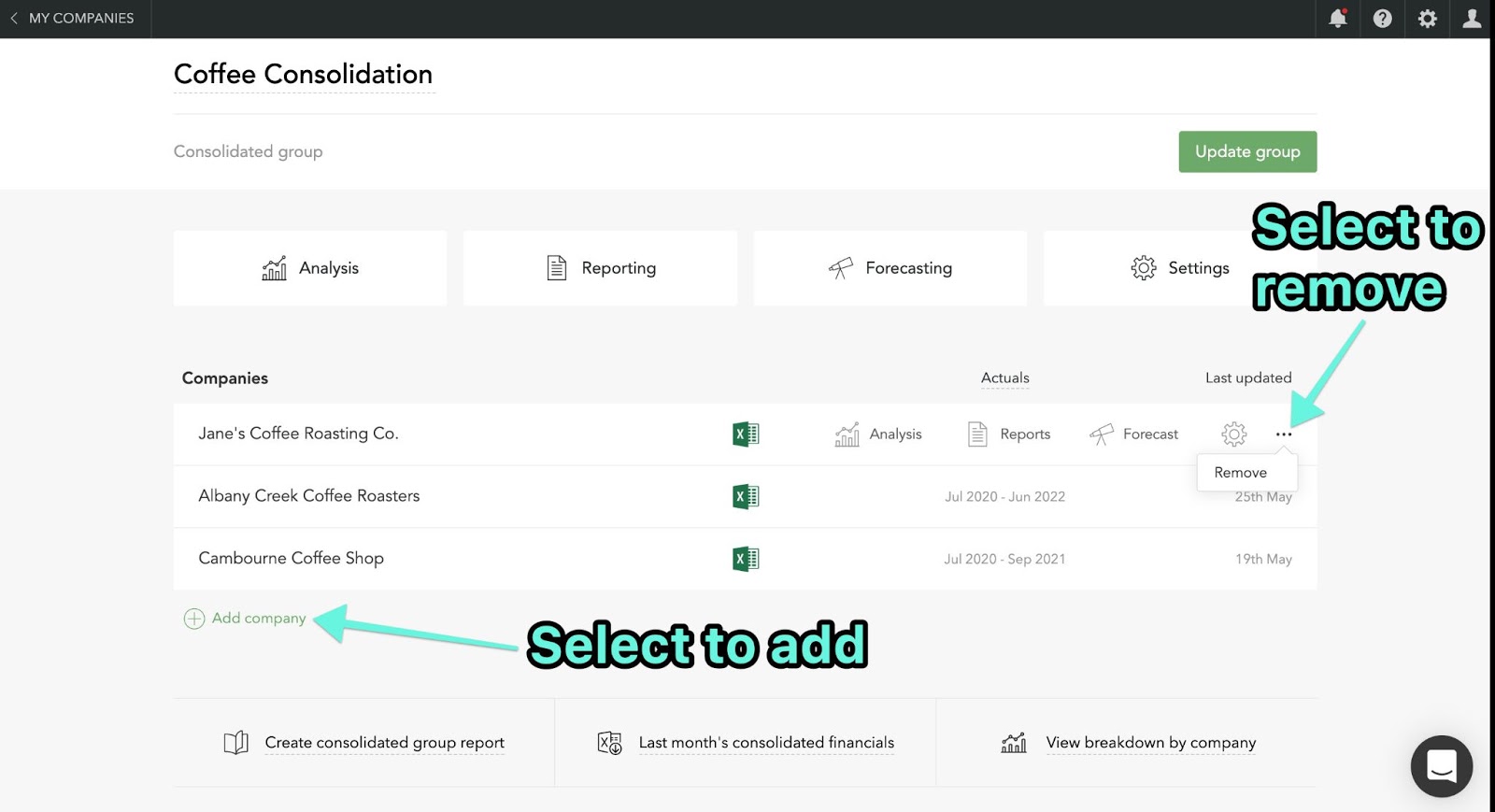 You can also add companies to and remove them from the group in ‘Step 1 - Update Data’ of the group’s Settings. You’ll find the options to add and remove companies by clicking the blue ‘manage group’ option that appears next to the list of member companies in the group.

💡Pro Tip: You must have more than 2 companies in a group to be able to remove a company from the group.

Changing the name of the group

In the upper left corner of the consolidated group’s landing page, you’ll see the name of the group listed. You can click on the group’s name to edit or type in a new name for the group.

Changing the financial year of the group or the presentation currency

To change the financial year or presentation currency of a group, go to the group’s Settings. In ‘Step 1 - Update Data’: