The Fathom Desktop Connector is a small (~6MB) application that is launched from the web browser.

The connector enables you to select an accounting file from the local file system or a mapped network drive and extract and securely upload financial data into Fathom.

To add a new company go to 'Add a Company' and choose one of the accounting vendors. You will then be provided with the option to 'Launch the Fathom Desktop Connector'.

To update an existing company go to 'Settings > Step 1 - Update Data' for a company.

The first time you launch the connector from the web browser you are required to provide your email and password. These should be the same details used to log in to Fathom.

Your password will be remembered for the next time you use the connector. 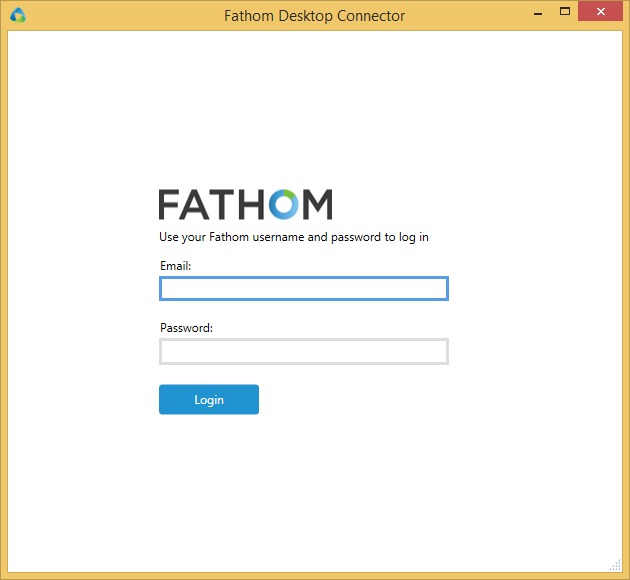 Adding a new company or updating an old one uses the same process. Simply click the 'Add Files' button and select the files from your computer. You can use CTRL and SHIFT keys to select multiple files at once in the file selector dialog.

Some files may require you to enter a specific username and password.

You cannot add two companies with the same name.

What information is extracted?

The Fathom Desktop Connector extracts the following information and securely uploads this information to the Fathom servers.

All data is encrypted using SSL as it is transferred to Fathom.

The Fathom Desktop Connector utilises Microsoft ClickOnce technology and consequently will only work on Windows 7 and Windows 8 or later.

Macintosh OS/X is not supported.

The connector can be launched from Google Chrome, Internet Explorer or Firefox.

The Microsoft .NET framework v4.7.1 must be installed on your system. Most Windows installations will already have this installed however if necessary it will be automatically downloaded for you as part of the installation of the desktop connector.

To install the .NET framework manually:

The Connector uses Microsoft ClickOnce technology which is only supported in the most recent versions of Windows Terminal Server.

Using the Desktop Connector in a Citrix Environment

The following article from the Citrix Support website is a helpful resource:

From time to time the connector will be updated to incorporate new features and/or improvements. This requires no user interaction. The new version will be downloaded automatically when you launch the connector.

For problems related to a specific file type or vendor please see the relevant help article: